Welcome! We're glad you are here to help us celebrate all things sheep and wool, apart yet together.
Read More

Sunday Lecture: My Story, A Fiber Artist’s Path to Success with Diane Ivey

Every business has a story to tell about how it was started and the steps that were taken for it to become a success. Join Diane Ivey, owner of Lady Dye Yarns, as she discusses the path she followed in creating her indie dye yarn company, from initial idea to established brand. In addition, Diane, who has been a prominent voice in the fiber community’s recent conversation about diversity and inclusion, will share her journey toward helping create a more diverse and inclusive crafting community.

Class Fee: $5, payable at the door on a first come, first serve basis.

Diane Ivey holds a Bachelor of Arts in Political Science and Mass Communication with a concentration in Print Journalism from Georgia College & State University. She also holds a Master’s in Public Administration with a concentration in Non-Profit Management from Suffolk University. Prior to starting Lady Dye Yarns, Diane spent about 10 years in the non-profit sector starting as an AmeriCorps member with City Year Rhode Island and then joining the City Year Boston Staff as a Program Manager. She also became the Program Support Specialist at the Big Sister Association of Greater Boston. After attending graduate school, she worked for The Boston Foundation as the Administrative Coordinator for the StreetSafe Boston Initiative. In addition to working on the business, Diane also teaches fiber arts classes at the Eliot School of Fine & Applied Arts, JP Knit & Stitch in Jamaica Plain, The Cambridge Center for Adult Education, and elsewhere. A knitter for the last 17 years, and dyer, spinner and crocheter for 12 years, Diane looks forward to expanding her business.

Presenting our 2020 catalog cover, featuring an original woodcut done just for us by Bobby Rosenstock of JustAJar Design Press. 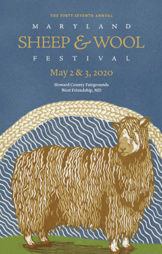 Attention please! We ended up with a small quantity of 2020 merchandise left over from our virtual festival order. This includes short sleeve t-shirts, long sleeve t-shirts, sweatshirts, tote bags, sling bags, backpacks, posters, note cards and enamel pins. Sorry, no mugs, and not all sizes are available in the shirts and sweatshirts.

This may be your last chance to get 2020 Festival merchandise!
... See MoreSee Less

If you are interested in applying for a vendor booth at the 2021 festival, we are now accepting new vendor applications online at sheepandwool.wufoo.com/forms/m4g8glw1owx10u/. The deadline for applications is October 1. ... See MoreSee Less

A message from Sheepman Supply regarding advance orders for 2020 festival merchandise that were placed during the virtual online festival:

"We should complete shipping of all orders THIS WEEK!! We are very pleased and excited that it only took us 2 weeks (literally M-F) to ship out over 800 orders!! We got the items 2 weeks ago Wednesday, June 10th, started shipping June 11th and we will be done on Thursday, June 25, with a staff of only 3-5 workerbees!! YES, Sheepman Supply is patting ourselves on the back!!"

Also a shout out to Tradewinds Studio who worked diligently to get the blank items ordered and everything printed once non-essential businesses were allowed to re-open.

Except for large posters (which were printed before the decision was made to cancel the festival), we only ordered enough items to fill the advance orders plus a few extra to allow for exchanges for a different sizes or to replace damaged merchandise. When the dust settles, we might have a small (very small number) of 2020 items left, but have not yet made a decision about whether these will be sold online or at next year's festival.