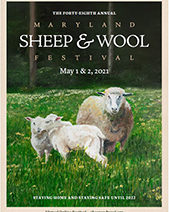 George Maurer’s name is well known to Maryland shepherds, and it’s no 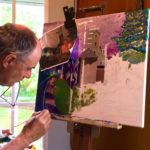 t because of his artistic talent. Recently retired, George was a partner in the family meat processing business, Maurer & Miller Meats in Manchester, Maryland for more than three decades. George’s family moved to Maryland in 1960 from Kalamazoo, Michigan where his father worked at a meat packing plant. In 1962, George’s father incorporated Maurer & Miller Meats with his friend and fellow Marine Eugene F. Miller. In 1987, George, his brother Stephen, and his brother-in-law Tom Richards bought the business from his father, George J. Maurer. George patiently coached many local (and not-so-local) shepherds on raising the best possible lamb for the dinner table, however, working 12-hour days, sometimes six days a week, didn’t leave much time or energy to paint. Since his retirement, he has spent much of his time pursuing his passion for painting. 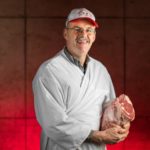 In an article in the July 2020 edition of the Mason Dixon Surveyor, George said, “I don’t have any formal training, but I was interested since I was a kid”. He enjoyed art at North Carroll High where he graduated in 1971. “I never took an art course when I went to Frederick Community College, but I would always walk through the art building to see what they were doing.”

A turning point came when his daughter entered elementary school and Maurer started taking her to Barbara Schnell’s studio in Hampstead, Maryland. “My Mom knew that I like to draw so she signed me up for lessons,” says Amber Maurer Farran, who graduated from McDaniel College in 2009 with an degree in art. “It was mostly little kids in the basement—4th or 5th graders—and it was only an hour class. 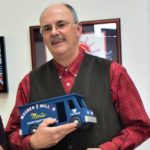 “At first, my Dad waited in the car, but then he came in and started drawing, too.” George Maurer explains, “I’m not going to drop you off and come back to pick you up. The class wasn’t that long.” Father and daughter ended up painting together in Schnell’s basement all the way through middle and high school. When Amber eventually stopped going, he continued. “I think he was inspired by watching me paint,” she says, “and he started to paint the kill floor at the butcher shop. Paint what you know, right?”

George is intimately attuned to the natural environment, local agriculture, artisans, and trades which compete agribusiness. He is a member of the Carroll Arts Council. In January 2014, George and Amber had a show together at the Carroll Arts Center entitled “Meat the Maurers,” and in Spring 2019 they had another show together at Off Track Art in Westminster, Maryland entitled “More Than Meats the Eye.” George also has art hanging in Dutch Corner Restaurant in Manchester and he participates in the Annual CCAC Members Art Show.