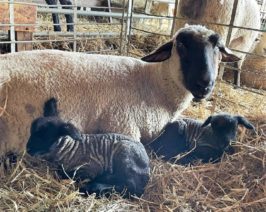 The Hampshire sheep was developed from the crossing of Southdowns and Wiltshire Horn-Berkshire/Knot crosses in Hampshire County in Southern England. Later improved using a Cotswold ram followed by two of the largest and best Southdown rams, the Hampshire breed was imported to North America for the first time in 1840. After being almost entirely killed off during the Civil War, the breed was re-introduced in 1865 and, since then, these larger meat sheep have become extremely popular throughout the nation for their rapid growth, efficient feed conversion, and carcass cutability. Given good pasture, these animals are known to be adaptable to various geographic regions and are not easily startled. In addition to their high-quality carcasses, Hampshire sheep are also noted as being quite prolific and good milkers.

Breed standards state that Hampshire sheep should have dark faces and broad muzzles with an unbroken wool cap from the neck over the forehead. From the eyes down, the face should be clear with the exception of some light feathering. Wool is desirable on the legs below the knee. Structurally, Hampshire sheep are expected to have legs placed under the corners of the body with amble elevation to balance the body size with height.

Although Hampshires are not a wool breed, their dense fleeces do take dye nicely and good for hard-wearing goods. Seeing as the strong, elastic wool (24-33 microns) does not felt easily, these items may also be machine washable.