Katahdin sheep are born in the USA!

The breed was originally developed in the state of Maine by Michael Piel, the breed founder. The traits he wanted were:

Katahdin sheep have no wool!

They have hair like a dog and can grow hair in the winter and shed the hair in the summer.

Katahdin sheep are born with long tails (like all lambs do) but the Katahdin Breed Association Standards say to leave the tails long and not to “dock” (cut short) the tails.

Katahdin sheep come in a variety of colors: solids of black,or white, or red, or brown and even harlequin: black and white spots, or brown/ fawn and white spots or mottled (freckled).

Katahdin sheep have a 200% lambing ability and can often have twins, triplets and even quadruplets!

Dorset wool is also amazing to spin. It is a nice spongy soft fiber for mittens, socks and outer clothing.

The history of the Montadale breed of sheep dates back to over half a century and is one of the most amazing success stories in modern sheep-breeding history. While other breeds have been developed in the United States, Montadales are the only breed to have been developed by private enterprise.

Much of the credit for the development of the breed goes to E.H. Mattingly, a well- known commercial lamb buyer who was obsessed with the idea of producing the ideal sheep. Early in his youth, Mattingly had been advised that if he could bring together the qualities of the big western white-faced sheep and the popular mutton characteristics of the Midwestern sheep, he would have the perfect breed.

Many breed combinations were crossed throughout the years, but it wasn’t until 1932 when he purchased the first Columbia ram to go east of the Mississippi River to cross on his Purebred Cheviot ewes that provided Mattingly proof that his mission was on target.

In order to find the most profitable combination, the sire and dam of the two parent breeds were eventually reversed, with testing being conducted for … 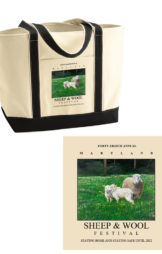