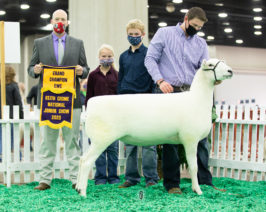 The history of the Montadale breed of sheep dates back to over half a century and is one of the most amazing success stories in modern sheep-breeding history. While other breeds have been developed in the United States, Montadales are the only breed to have been developed by private enterprise.

Much of the credit for the development of the breed goes to E.H. Mattingly, a well- known commercial lamb buyer who was obsessed with the idea of producing the ideal sheep. Early in his youth, Mattingly had been advised that if he could bring together the qualities of the big western white-faced sheep and the popular mutton characteristics of the Midwestern sheep, he would have the perfect breed.

Many breed combinations were crossed throughout the years, but it wasn’t until 1932 when he purchased the first Columbia ram to go east of the Mississippi River to cross on his Purebred Cheviot ewes that provided Mattingly proof that his mission was on target.

In order to find the most profitable combination, the sire and dam of the two parent breeds were eventually reversed, with testing being conducted for several years such as growth and development of the lambs, the number of lambs per ewe, lamb weights and fleece weight and grade. The records clearly proved that the best results were from this cross.

With adoption of the Columbia ewe and the Cheviot ram as the foundation of the Montadale breed, the next step was to establish a “Standard of Excellence” or the blueprint for all future breeders to use as a guideline for breeding of this ideal dual-purpose sheep.

The standard had eight points:

Nine more years of selective culling and line breeding produced a sheep which consistently met the desired standard. E.H. Mattingly’s dream was realized, and although still in its infancy, the Montadale breed was officially established.

In 1945, the Montadale Sheep Breeders Association was founded with five charter members; E.H. Mattingly becoming the first Executive Secretary and Anne Gregory the Secretary-Treasurer. By 1946, there were over 110 members with approximately 5,500 head throughout 16 states. However, it wasn’t until February 1947 that the Association was officially incorporated after securing a charter from the State of Missouri. The establishment of the first National Montadale Show and Sale soon followed in July 1947 and was held in Montgomery City, Missouri, in conjunction with the local county fair.

Montadale fleeces are gaining popularity with spinners and crafters.