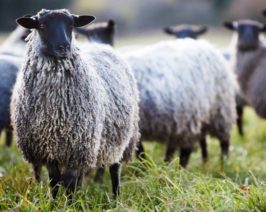 Gotland sheep are a dual purpose breed that is renowned worldwide for their clear grey, lusciously soft, curly pelts.   Arising from the “Gute” landrace breed on Gotland Island, their ancestors were carried on Viking ships for food and the wool to make clothing and sails. Although some historians believe that the modern Gotland was created by crossing the Gute with imported Romanov and/or British longwool breeds, others, including long term breeders on Gotland island believe that the modern Gotland was created strictly by selection of the best sheep on the island.  This controversy will likely only be resolved once we have the genetic ability to discriminate the genetics of different breeds.

Gotland sheep are beautiful, friendly, medium sized sheep.  They have no horns (though occasionally small scurs appear), have clean heads and legs and, like many of the northern breeds, have short, clean pointy tails.  They are fine boned, with slender legs and necks, alert faces and ears, and well defined belly for rumen space.  They do well on grass and are perfect sheep for small holdings and grass-fed lamb.

Their crowning feature, however, is their wool, which is long, lustrous and silky.  Although difficult for beginning spinners, the silkiness is prized by hand spinners worldwide.  It generates a spun fiber that, when knitted or woven, drapes like fine cloth.  Traditional Gotlands in Sweden range in color from clear pale silver to a dark grey that is almost black.  In the US, shepherds are bringing the Gotland to the country using imported Gotland semen and foundation ewes from the northern short-tail breeds or British longwool.  They have consequently taken the opportunity to incorporate some of the colors from the foundation breeds and, today, Gotlands in the US can be found in the traditional clear grey, as well white, black and moorit (an auburn color that ranges from fiery red to deep chestnut to pink champagne).  The wool itself has a loose curl that turns in three dimensions, and is typically in the medium micron range (30 plus minus), though lambs can be considerably finer.  The strength of the wool, coupled with its silkiness, creates a wonderful hand, with little of the “scratchiness” of some other longwool breeds.

In Europe, Gotlands are mostly raised for their pelts.  Here in the US, the market tends, at the moment, to be for the wool.  There are two main lines of Gotland genetics available to US breeders: Gotlands from Sweden (either directly or via sheep imported in the last century to Great Britain), and Gotlands that were imported into New Zealand and raised there for about 40 years.  The Difference in the two is that the Swedish Gotlands have been selected for the characteristics that make superb pelts, whereas the New Zealand-raised Gotlands were selected more for handspinning wool (as handspinners in nearby Asian countries were their primary market).  Lambs of both lines have amazing wool.  As the sheep mature, however, their wool begins to differ.  The Swedish type Gotland ewe (the original!) grows a stronger, wool that stands up to the elements, whereas the NZ-derived Gotland keeps a softer wool, but loses a bit of its luster.  Some US breeders are working to combine these characteristics to generate an adult Gotland that maintains its soft wool and its luster. (For more information about Gotland wool, see the video at https://youtu.be/DBMgtsf3mcE).

There are currently two Gotland breed organizations in the US.  The Gotland Sheep Breeders of America, which was the earliest, recognizes Gotlands of different colors (grey, white, black and moorit) and also recognizes imported genetics from Sweden, Britain, and New Zealand.  The American Gotland Sheep Society, prioritizes the original Grey color of the Swedish-type Gotland, and recognizes only Swedish and British genetics.