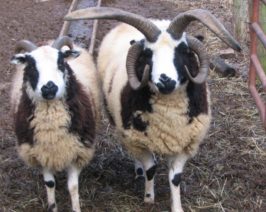 Jacob sheep are a primitive (unimproved), multi-horned, spotted sheep. Jacobs are small in stature, with mature ewes weighing 80-120 pounds, and rams weighing 120-180 pounds. The Jacob breed was developed about 400 years ago in England, where the sheep were kept at just a few large estates. The name Jacob was applied only in the last century (probably because of the reference to spotted sheep in the Biblical story of Jacob). Before that, they were known as piebald (spotted or patched) sheep.

Horns: Both males and females are horned, generally one or two pairs, with some rams and ewes having up to six horns. The ram has larger and more striking horns. The two-horned ram has the classic horizontal double curled horn. The four-horned ram has two vertical center horns, which may be up to two feet or more in length, and two smaller side horns, which grow down along the sides of the ram’s head. The horns on the ewe are smaller in diameter, shorter in length and appear more delicate than those of the ram.

Markings: The Jacob is a white sheep with black spots. The desired Jacob face is referred to as “badger faced” with black cheeks and muzzle, black patches around the eyes, and a white blaze down the nose. Other breed-specific markings occur as black patches around the neck, and on the horns, ears, hooves, knees and hocks. Random spots occur on the rest of the body and legs. The color pattern is approximately 50% black to white, though a great variation in the amount of black occurs. Each Jacob has distinctive markings, which enable the shepherd to identify specific sheep at a distance.

Wool: The Jacob fleece is prized by many spinners, weavers and knitters. It is open, soft, and light with little grease (lanolin). The black wool grows out of black skin and the white wool grows out of white or pink skin. Black wool may sun-bleach to a spectrum of browns. In one of the variations of the breed, instead of black wool, some Jacobs have blue-gray to gray-brown wool, known as “lilac.” The light and dark wool may be blended before spinning to form various shades of gray and brown. The colors may also be separated after shearing to produce various shades of yarn from a single fleece. The fleece generally weighs 3-6 pounds and varies in crimp and fineness. Staple (cluster) length is generally 3-5 inches and may be up to 7 inches. The wool is considered to be a medium grade (Bradford count 46-54). One characteristic of Jacob fleeces is the wide range in variation, not only from animal to animal, but along the length and width of the individual fleece. Many Jacobs show some crimp in the wool at the shoulders, but not on the hindquarters. The wool on the lower rear legs is typically quite kempy (coarse and hairy). These characteristics reflect the primitive origins of the Jacob.

Perfect for the Small Farm: Whether you want to breed or to raise just a few sheep, consider Jacobs. They have a striking appearance and playful personalities. Jacobs are strong and hardy, resistant to parasites and foot problems. Jacob ewes lamb easily and have strong mothering instincts. Please join us in the conservation of a unique and rare breed, the Jacob sheep!