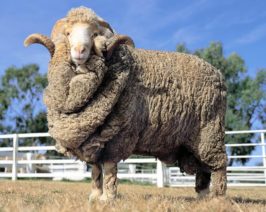 The Merino sheep is a very important and popular breed of domestic sheep. It was originated in Spain and it is highly prized for it’s wool.

The modern Merino sheep were domesticated in Australia and New Zealand. Sheep were introduced by the Phoenicians from Asia Minor into North Africa.

And the foundation stocks of the Merino might have been introduced by the Marinids, a tribe of Berbers in Spain as late as the twelve century.

Although there were reports of the breed in the Iberian peninsula before the arrival of the Marinids; perhaps these came from the Merinos or tax collectors of the Kingdom of León, who charged the tenth in wool, beef jerky and cheese.

The Spanish breeders introduced English sheep breeds, which they used and bred with the local sheep breeds for developing the Merino sheep in the thirteenth and fourteenth centuries.

This influence was openly documented by the Spanish writers at the time. Most of the flocks of these animals were owned by nobility or the church. And the flock grazed the southern plains of Spain in winter and the northern highlands in summer. The Merino sheep is the foundation stock of many well known and modern sheep breeds. And today, they are available in many countries, almost throughout the world.