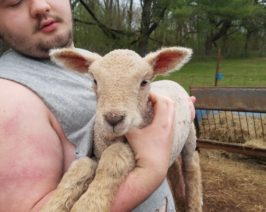 The Southdown is one of the oldest purebred sheep breeds in the world. The breed originated centuries ago in the hills of Sussex, England, long know as the “Downs.”

There is little written history or description of the Southdown dating earlier than two hundred fifty years ago. The early Southdown was noted for some important qualities for which they have since become especially famous, they had a good leg, and their meat was excellent, possessing remarkable flavor.

Early literature indicates that Southdowns were among the animals brought into the English colonies as early as 1640. Later, documented importations where made into the United States from 1824 to 1829 from the English flock of John Ellman.

The 1960’s saw increased importation of the larger New Zealand Southdown to upscale the American Southdown. The increased size resulting from blending the New Zealand genetics into many flocks across the U.S. is the reason for much of the success and popularity of the modern day Southdown.

Southdowns are excelling as terminal sires in commercial production flocks, receiving the final handshake in supreme champion drives all over the country and are the first choice of many youth, families and sheep producers. Check out this website to see what all of the excitement is about! Most of all, let us know how we can help you explore the Southdown breed!